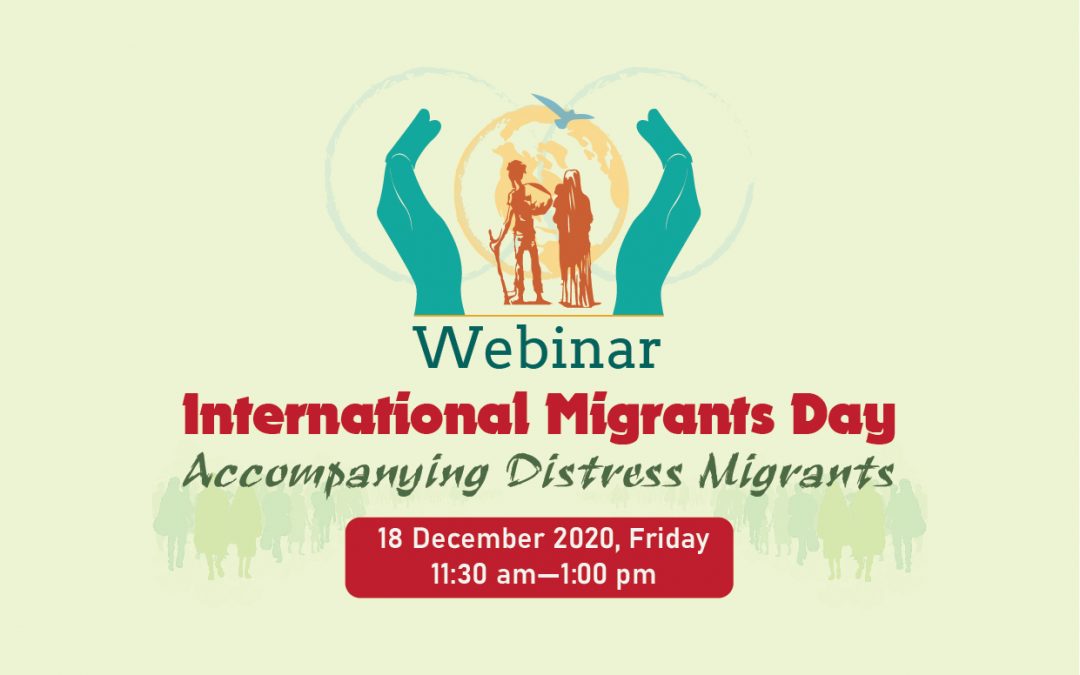 The International Migrants Day was celebrated online through a Webinar on December 18 th 2020, where we had nearly 1000’s of participants.

A video on Migrants prepared by Jesuit Conference of India-Conference Development Office (JCI-CDO) was played to set the context. Dr. Siji Chacko, director of JCI-CDO, welcomed the audience by sharing the works of Jesuits and Collaborators involved in the work of Migrants for almost two decades. He said, the plight of the Migrant Workers, who have largely remained invisible in the trajectory of the so-called mainstream development, has been brought to light during the global pandemic COVID-19.

Prof. Agnelo Menezes, Economist and former principal of St. Xaviers’s College, Mumbai moderated the session. He brought everybody’s focus to the Fright, Plight, Rights, Might and Fight of Migrants during the Pandemic through a presentation. He said, we must help the Migrants and fight for their rights and gave a picture for clear understanding of the discussions ahead which is shown below.

The Migrants’
FRIGHT plus PLIGHT = FLIGHT
MIGHT plus RIGHTS = FIGHT

On this occasion, Dr. Jerome Stanislaus D’Souza, SJ, president of South Asia announced the launch of Migrant Facilitation Net (MFN), a helpdesk for the distress Migrants and gave his message. The International Migrants Day celebrates an individual’s rights to overcome adversity and to live a better life. It upholds solidarity and fraternity; it affirms inclusiveness and co-development. Jesuits had collaborated with various NGO’s and were able to reach out to many Migrants during the time of pandemic.

Shri. Rajiv Khandelwal, said, has made a comprehensive policy statement which covers the rights of Migrants. Often the work of Migrants is conducted in a very hazardous environment, there would be less support of the local authorities and very little legal support. Nevertheless, as a society we should be undoing things as it’s done, instead we should see that the work should create enough surplus, work should be secured and safe, it should be conducted in dignified position and it should have the potential to provide legal aid to the workers/laborers.

Dr. Sunitha Krishnan said, while the Migrant issue took a huge center stage because of politicization, there was multilayers of impact on women and children, such as loss of livelihood, the increasing debt, increased amount of domestic violence, many poor children loss access to education, there was heavy child sexual abuse etc.

Shri. Shabir Nair said, India is a big sending as well as a destination country. Many countries have developed a sense of perception around which it is based on national policies, vote banks and populist demands which then leads to develop policies for the Migrants. We should include, migrants in conversations in forums, committees and give them the opportunity to present themselves to celebrate the International Migrants Day.

There was constant live tweet on the social media platforms of Jesuit Conference of South Asia and India while the session was going on. The link to the program is given here: https://www.youtube.com/watch?v=jbKCw_H5c98