Leave no one behind: Vaccine equity in the Global South 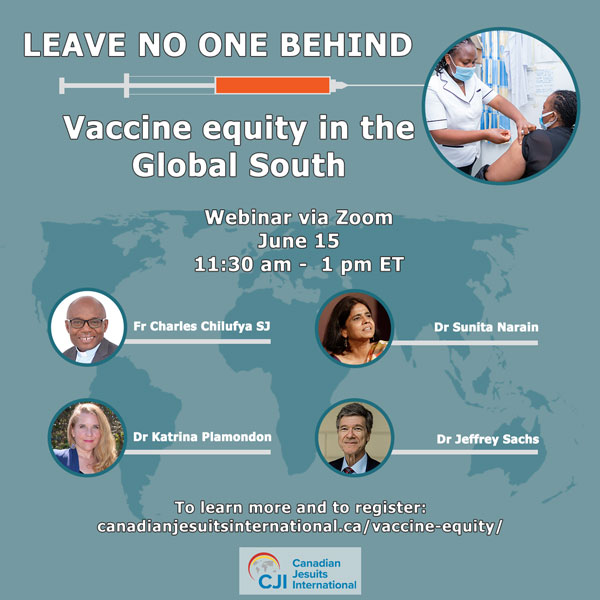 Jenny Cafiso, Executive Director at Canadian Jesuits International compered the webinar session. This session was hosted from Toronto, Canada. The webinar was organized on the access to Covid vaccine as it has been a challenge for some marginalised people to get the vaccine and to ensure equal justice to all people.

Dr. Jeffrey Sachs, Professor & Advisor, Director of Centre for Sustainable Development at Columbia University, President of UN Sustainable Development Solutions Network, Commissioner of UN Broadband Commission for Development, Advisor to three United Nations Secretary General, Advocate of Sustainable Development Goal. He was ranked by the Economist among the top three as the most living influential economist. He stated, that the production of vaccines are done by only countries such as, United States, Europe, Russia, China and India. To have 60% of the world’s total population vaccinated would be about 4.7 billion people and this would cover roughly around 80% of the total adult population. Therefore, the aim is to vaccinate nearly 5 billion people around the world. So far only 1 billion have been vaccinated mostly belonging to the vaccine manufacturing countries. Covax did not receive an adequate and predicted flow as India was affected badly from the second wave and government had to ban the export of vaccine to other countries due to which many other countries are left with no vaccine. He further said, the rich and powerful countries have reached a saturation by vaccinating people however, not entirely 80% as some people have anti-vaccine sentiments. This is very ironic because there are countries who are dying to receive vaccine doses whereas the people of rich country are not willing to take vaccine because of their certain beliefs. There is vaccine supply available but there is no concrete plan by the government of the rich countries (G7 group) to reach the people with vaccine. There is no clear timeline, a clear accounting month by month of when vaccines would be available and to whom would they go. This is because there is no plan of allocation by the production laboratories and the government of US & China do not want to hear to each other’s plan due to their internal power issues. He suggests that other countries should try and produce vaccines however, for the next six months the G7 group should have a plan to reach the world with complete vaccination doses. As citizens of various countries we need to pressurize the G7 governments to have a concrete plan to distribute the vaccine to all nations.

Fr. Charles Chilufya, SJ, is the coordinator of the Africa Task Force of the Vatican COVID-19 Commission. He is a Jesuit priest who has served as Director of the Jesuit Conference of Africa and Madagascar (JCAM) Justice and Ecology Office (JEO) since 2018 in Nairobi. He quoted, Article 25 of Universal Declaration of Human Rights covers a wide range of rights, including those to adequate food, water, sanitation, clothing, housing and medical care, as well as social protection covering situations beyond one’s control, such as disability, widowhood, unemployment and old age. Mothers and children are singled out for special care. He said, that failure of Global Justice crisis is a failure of humanity. There have been economic and labour market impacts of the pandemic such as job losses, forced leave, pay cuts, salary suspension etc. Even during pre-COVID the status of the households were low and weak. The children of Africa have been deeply affected by having their schools closed. He gave some examples of real people who have been affected by COVID pandemic. Dr. Sunita Narain is an environmentalist and writer, and presently serves as the director-general of Centre for Science and Environment (CSE) and Editor of the fortnightly magazine, Down To Earth.

Dr Narain plays an active role in policy formulation on issues of environment and development in India and globally. In 2016 she was featured by Times Magazine as one of the top 100 most influential people in the world. She said, the ability to be able to protect oneself is at risk. There is no hygienic water to wash hands properly. This pandemic is not just about losing lives but also about losing the livelihoods of people. The rural economy is at a crisis and this is adding to human distress. The governments of India and Africa do not have the capacity to provide proper vaccination access to the marginalised people of
their countries. She further said, that COVID 19 is not the only pandemic that has caused the distressful situation for people but it is an addition to issues that were already prevailing. This is pushing back poor people to the extreme level of poverty and the only way to stop this is to provide vaccination to every single person and save them. The G7 group has not been able to provide vaccines to 1 billion people. The vaccine doses are sold at $10 per vaccine which is seemingly costly for the poorer countries to buy. She also said, that the government of India can procure vaccines and sell per vaccine dose at the rate of $2 and has the capacity to do a universal vaccine program. This is only possible if the rate of the vaccine is brought down to a cheaper cost.

Dr Katrina Plamondon is an Assistant Professor at the School of Nursing at the University of British Columbia Okanagan. She is a Canadian woman of Cree-Irish-Quebecois ancestry whose research focuses on how to advance evidence-informed equity action. She co-chairs the Canadian Coalition for Global Health Research’s University Advisory Council and is a member of Canada’s National Scientific Advisory Committee for Global Health. She said, that the government of Canada has been the Anchor Donor to Covax and has invested $220M in the procurement of vaccine in the low- and middle-income countries. However, this is done very late at the cost of intense amount of dehumanization and it ignores the failures of Global governance. She further suggested, to interrupt the use of Dehumanizing Rationalizations for Irrational Things, Act Globally with Transparency (Global Health Action is Global Public Good), Enable Sharing & Scale-up & Distribution (WTO TRIPS Waiver, Equity vs Profit, strings attached), Use Your Voice (Read more, call your MP, Talk to your communities and families).

The link for the YouTube video for this webinar: https://youtu.be/6DD2N5FiJQU