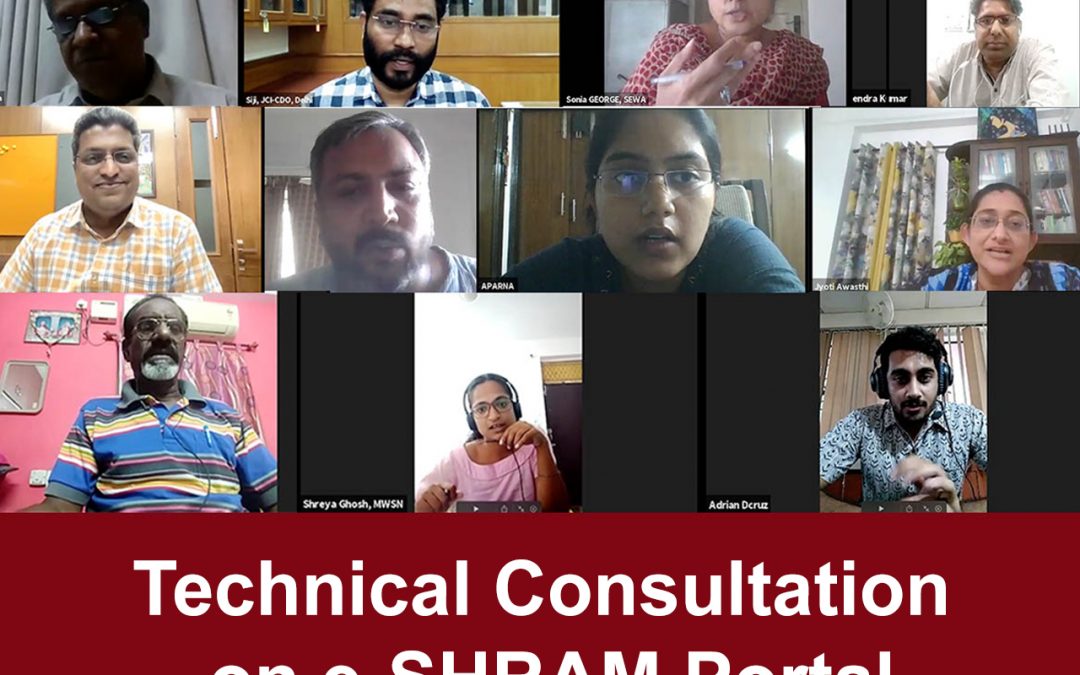 The COVID-19 pandemic brought the most glaring plight of the informal sector workers, especially migrant workers, to the limelight. The mass exodus of migrant workers made the country realise the stark reality of the ‘invisible workers’ and the importance of having their database to reach out to them effectively in times of crisis. With the pressure exerted by civil society and non-government organisations (NGOs), and the Supreme Court of India stepping in, the Government of India has launched the e-Shram Portal for the registration of all unorganised sector and informal workers in the country.

In this context, the Migrant Assistance and Information Network (MAIN), Caritas India, Labour Office of the Catholic Bishop Conference of India (CBCI), SVD and Don Bosco 4 Migrants  jointly convened a “Technical Consultation on the e-Shram Portal”, 24 September 2021, to comprehensively understand the nuances of the portal and suggest measures to address the challenges therein effectively.

Dr. Siji Chacko, SJ, Director, MAIN, welcomed the panellists and participants and outlined the context of the consultation. He said the e-Shram portal is indeed a significant step towards registering unorganised workers including construction labourers, migrant workers, street vendors and domestic workers, gig and platform workers, etc. Workers from these categories, though forming the bulk of the country’s labour force, remained by and large “invisible”. They are not provided any form of social security and protection. The portal provides all the registered workers an e-Shram card containing a 12-digit UAN (Universal Account Number), and they can access benefits of government schemes even if they are working outside the state. The registration of workers on the portal is coordinated by the Labour Ministry, state governments, trade unions and the Common Service Centres (CSCs). Although we are in the initial stage of the registration process, it is important to acknowledge the importance of engaging with the workers’ organisations and unions, NGOs and others working among unorganised sector workers in facilitating maximum registration of the workers and to deter their exclusion. Moreover, they should be involved in generating awareness about the portal and to conduct training programmes for facilitating workers’ registration on a larger scale. Comprehensively understand the nuances of the e-Shram Portal–Registration process, benefits, challenges and issues with workers’ registration. Dr Siji Chacko said the objectives of the consultation are to a) Identify the gaps and propose a set of recommendations to address the same; b) Plan a Stakeholder Consultation to engage effectively with the registration process, including conducting mass awareness campaigns among unorganised sector workers; and c) Plan advocacy to ensure that no unorganised or informal worker is excluded from the e-portal that deprive him/her from accessing social security benefits and entitlements.

Fr. Eugene Pereira said, the pandemic COVID was a moment of soul searching. The civil society, NGOs, academia, media, and the whole government was groping in darkness to address the issues of the migrants. On 8 September 2020 the Ministry of Labour came out with an advisory guideline instructing the state governments to begin with Nodal officers and felicitate centres for registration of Migrants. It was in September 2020 and nothing much moved. On 15 March 2020, to initiate a synergy of actors in the field—MAIN, Caritas India, Migrant Commissioner, Labour Office of CBCI, IGSSS, ISI and many more had gathered to discuss on the issues of Migrants. On 29 June 2020, with the engagement of various CSOs, the Supreme Court of India had come out with a speaking order, why remain so silent, why the governments are not acting. It is in this backdrop and the e-Shram portal that we’ve gathered together to introspect into the very technology of the portal and various other proposals made. He said, 47 crores informal migrant workers in the unorganised sector will get a face through this portal. Fr. Eugene introduced each of the panellists and moderated the discussions thereafter.

Speaking at the occasison, Dr. Sonia George, General Secretary, SEWA, New Delhi, who has been working with women working in the unorganised sectors, said more than a crore worker workers have registered in the portal as per the source from government. When the migrant workers go for registration, there are no specific identity for them as workers in informal sectors. The government has instructed by the end of December 2021 the survey of migrant workers should be completed. For the domestic workers somebody else home is their workplace. Most domestic migrant workers stand as an invisible identity as the house setup do not come under any formal sector. Access to the registration on the portal is quite difficult for the migrant workers and when they approach for registration, and the middle men charge huge amount from the workers to register. Therefore, the major concern is that how many percent of the migrant workers would be able to access the online digital portal registration service. The informal sector is wide and complex as the workers do multiple job at different level. Many workers work in micro or nano enterprises. There is no space to record the details of the employer in the e-ashram portal which also means who would be responsible for the workers. There should be a process for self- employed as well. The state should have some kind of social security for the self- employed migrant workers. As part of state and central Acts many of the states are already having various social security provisions. The social security which has been announced is only Rs 2 lakh for accidental causes. There needs to be provisions for workers to get immediately food, livelihood security, children security, pension, ESI, etc. If a worker is not part of the ESI scheme then they are not eligible for many other benefits. Most women are not recognised in the unorganised sector.

Mr. Chandan Kumar, National Co-ordinator of Working People’s Charter (WPC), and labour activist, said, at WPC they issued a statement immediately after the government launched the portal. WPC had come with ideas what this portal covers and what it doesn’t cover. The country is very much fragmented on the basis of caste, religion and language. When a worker migrate from Odisha, Chhattisgarh, Jharkhand and Bihar they find it difficult to work in a state which is completely different in culture and language as they are discriminated. It has been the position of the central trade unions, as they reject the labour court as it is dismantling the labour laws. E-ashram card is a first step of the government to give an identity to the migrant unorganised sector workers. There are concerns about the future of all the sectoral boards. There are multiple boards running in Maharashtra and Tamil Nadu which is doing good for the unorganised sector, but now the government is saying that all kinds of workers should get an e-shram card. But this is a violation of federalism where the labour is situated in the concurrent list of the constitution. The e-shram card is not going to be of much use as the previous schemes like PMKY, and other schemes have been a failure. There is a CSC portal where a payment of 1400 is made and a written test is required. The digital literacy is going to exclude 80 per cent of workers. There is a restriction in age limit, and technically the government is removing one-ffth of the total population from having access to any benefits. There is no safe guard in terms of data privacy. If the central social security board doesn’t talk about how the social security will be given, then who is going to provide that and what will be the contribution given in the state. The first draft of the social security code talked about the criteria of the social security. i) The worker and employers will contribute; ii) A small contribution will come from the state and a small contribution will come from the employer; iii) When the workers cannot contribute, then there will be 100 per cent contribution from the state. By the time the fourth draft came, it was just a repackaging of Social Security Act of 2008. Although the ID card of e-shram portal is there now there is no guarantee on what kind of social security is going to come up. The questions to be asked to people’s representatives are who are the categories of workers registered, what are the occupations, workers from which state, what is the plan for creating sectoral social security as this is the major demand.

Mr Dharmendra Kumar, Secretary, Janpahal, New Delhi, said, workers’ access to data is promising. This can be used politically to fight for their rights. Inclusiveness and accessibility are major concerns. The two ways to register in e-Shram is one has to self-register or one has to approach a CSC centre. The workers are worried about what is going to happen in E-shram, if they are going to get benefits. What is going to be the future of all those who are already registered? What is going to happen with the rights they are already tackled to? And how the data is going to deliver them their rights. More than 1.5 crore people have registered which is far behind the time which was supposed to be 10 crore workers registered. Even if digitally literate or if they are able to approach a Common Service Centre (CSC) a major issue that is found is that workers do not carry the phone, which is registered with the Aadhaar. So, the worker has to go back to the biometric centre, update the phone number and then register on e-Shram.

Comments and Remarks from Participants

Mr Chandan had pointed Rs. 500 crore was spent on developing the e-shram portal. Despite that it doesn’t serve the purpose properly. The accidental benefit which is mentioned is not enough for the workers.

Ms Jyoti Awasthi, Laxmi, Ghaziabad, put up a question, are we taking into account the rights of social security protection rights of these workers.

Mr Dharmendra Kumar said, agriculture is there and there are 10 sectors which has been mentioned in crops, fishery, agriculture and horticulture.

Fr. Jaison said, the database is created so through the number of workers can be identified. The government was providing many things to workers during pandemic, but it wasn’t reaching to them. We need to work towards to improve the services that is provided to the workers.

Mr Adrian D’cruz, Indo-Global Social Service Society (IGSSS), New Delhi, said, as CSOs it is our responsibility to fasten the process of registration. They have started registering the workers and target is to reach 2000 workers by the end of October. We need to keep forwarding the amendments to each other.

Mr Chandan Kumar said, there are lot of glitches but the WPC is planning to write back to government and explain all the questions. Also, urged the participants to write to WPC all the issues they are facing while registering the workers.

Ms Aparna asked, workers who are registered under ESIC and have been unemployed for 2 years, should we recommend them to register in e-shram portal? She further asked, there are some unions who are charging money from the workers is there any complaint space as the workers should not be charged? She further asked people who charge Rs. 50/- is not legitimate. So, where can they be complained?

Mr Chandan Kumar said, the workers have to find alternative for jobs as they stand unemployed for a long period of time.

Mr Dharmendra Kumar said, that only Rs. 20 is charged by the unions which is a reasonable charge.

Mr Chandan Kumar said, there is a space under labour social security code under 2020 if anybody misuses this law action can be taken against them.

Mr Anil Kumar, Conference Development Office (CDO), New Delhi, concluded the discussions and stated the need for a larger consultation, with multiple stakeholders, including organisations, NGOs and institutes working with unorganised sector workers. He proposed to have a larger awareness campaign partnering with all CSOs across India, with state and Zonal-level consultations.